“It has stars in its eyes and loose teeth in its mouth.”
~A First Grade Class, Author Unknown

Over the weekend, my son, Snugs McNugget (yes, that’s his real name), lost his first tooth.

It had been wiggly for weeks, but Snugs had been hoping it would remain in his mouth until at least next year.

He’s a bit squeamish when it comes to things like blood and squished grapes on the floor of the grocery store, so he’d convinced himself that if he could just get one more year of life under his belt, he’d be ready for the loss of a tooth.

But it was not to be.  The tooth came out while he was brushing his teeth before bed.  Fortunately, there was very little blood and the only thing dramatic about the event was me, crying myself to sleep over it.

This isn’t about my inability to let go of my baby though.  It’s about the tooth fairy, who, if you think about it, is shady AF. 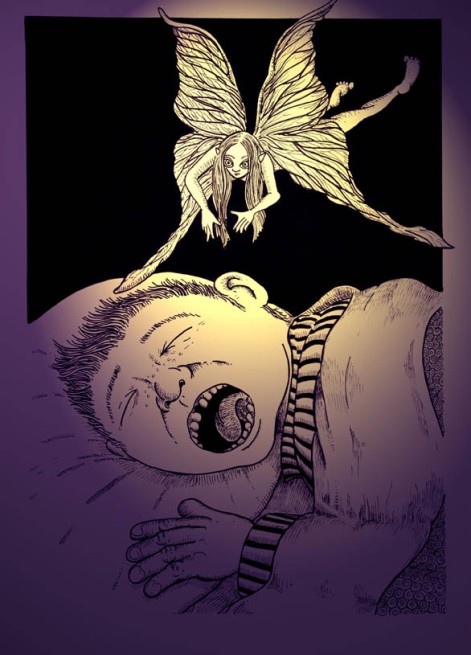 After Snugs’ tiny tooth had been salvaged from the sink, his thoughts went immediately to the tooth fairy.

“Do we just put the tooth right under my pillow for her?”  Snugs asked, without the slightest bit of trepidation.  “Or, do we have to put it in something?”

“I think we can just set it here, on the nightstand for her.”  I told him.

“But it’s supposed to go under my pillow”  he said, clearly worried that by not following protocol, the tooth fairy might not come.

In that moment, it sort of dawned on me how creepy the whole tooth fairy thing is.

Here was my son, six-years old, afraid of monsters who could be lurking in his closet, but he had no qualms, ZERO, about leaving a tooth under his pillow, for a strange fairy who would be coming into our house in the middle of the night to take it away.

A few months ago, while playing with one of his cousins, I found out that Snugs had watched an episode of Walk the Prank, a show on Disney XD, in which a group of kids pull pranks on random strangers.  The episode he saw included a skit called The Pig Man.

Here’s the quick synopsis:  An unsuspecting babysitter is reading a fictitious bedtime story called, IT Hides Under the Bed, about the legend of the Pig Man, to her young charge.

As she progresses through the book, they begin to hear some scary noises, the radio turns on unexpectedly and eventually, the Pig Man makes his entrance from underneath the bed.

The babysitter bolts from the room like her ass is on fire, leaving the kid to fend for himself, which is 100% what I would have done too.

For weeks after seeing the show, my son was terrified that the Pig Man was lurking underneath his bed.  We had to check and recheck at bedtime and the slightest nighttime  noise would send him flying from his bed and into ours.

But a fairy, who flits into bedrooms and slides her hand underneath the pillows of sleeping children in order to purchase their teeth?  Well, that’s just fine and dandy.

My son is a really smart kid.  And I’m not just saying that because he’s my kid.  For a six-year-old, he asks incredibly relevant and probing questions about politics, religion, history, books, music and people.  He’s a learner and an observer.

And yet, not once did he ask,“What will the tooth fairy do with my teeth?  Why would anyone want a collection of human baby teeth?”

He also had no interest in knowing what she might look like.  He knows what Santa and the Easter Bunny look like and neither of them are coming into his bedroom in the middle the night.  So I thought, surely he will want to know what a tooth scavenging fairy looks like.

I wasn’t really prepared with a description anyway.

But of course, I was a kid once too.  When I learned that my teeth could be exchanged for cash, which back then, jingled instead of folded, I couldn’t yank my teeth out fast enough and I didn’t give a flying molar about any of the details either.

Later, when I discovered mine and my siblings old teeth in one of my mother’s dresser drawers, I was horrified, but I didn’t immediately suspect her as the tooth fairy.  I just wondered what had happened with the rest of the body.

In the end, I convinced Snugs his tooth would be just fine on his nightstand where it could be easily plucked up.  “I think the tooth fairy will appreciate the courtesy,” I told him.

Snugs awoke the next morning, $10 richer (the tooth fairy didn’t have any change) and still not remotely concerned, or curious about the stranger who had left it for him.

Maybe, despite it all, it’s that special brand of believing, reserved only for children, that restricts their minds to the whimsy of it all.  How sweet it is to be little.